Stand With Ukraine 🇺🇦 Our Statement On The War

Why You Should Keep Working with Ukrainian IT Companies 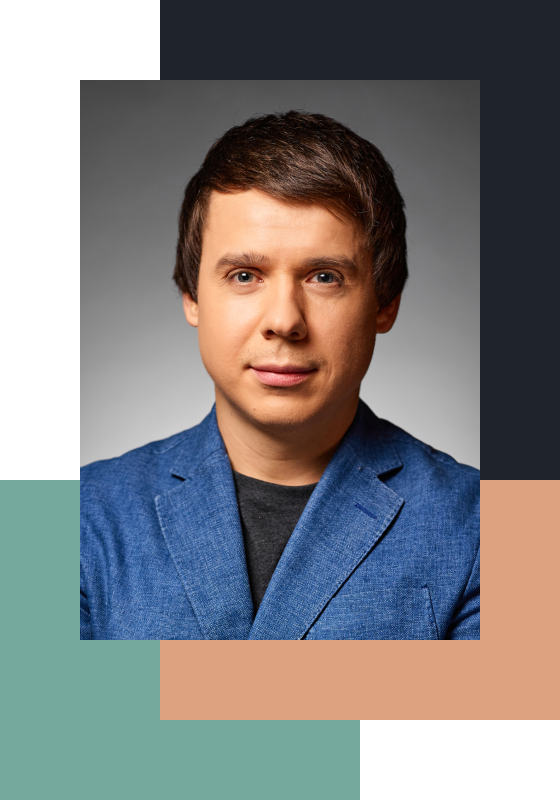 “Hi Roman! What changes should we make in communication with partners in wartime?” I’m the CEO of a software company in Ukraine, so it’s easy to imagine what was behind this and similar questions from the PM after February 24th. Of course, our partners have not expressed their growing concerns about the war directly. But when big investments are at stake, everyone wants to be reassured about their project’s stability. No one wants to chain-smoke while listening to reports from a dev team based in a hotspot.

In other words, we can’t ignore the armed elephant in the room. Our clients are worried. They aren’t sure whether the vendor will be able to deliver, the team members will be mobilized, a missile won’t hit the developer’s office, or you name it. And since it’s obvious that Russia’s full-scale invasion has increased risks sharply, we should shed some light also on the measures we’re taking to protect our business and our customers’ projects.

To start, let’s be clear: the Ukrainian tech sector has become more cohesive than ever. It would be a mistake to lose sight of its possibilities and prospects.

According to the IT Ukraine Association, before the 2022 Russian invasion, the Ukrainian tech industry had grown to USD 6.8 billion in exports. Our IT outsourcing and outstaffing providers collaborate with more than 100 clients from the Fortune 500 and a number of other large companies.

The next direction is evolving product companies and startups that have also become quite big and are occupying a significant share of the Ukrainian tech sector. Some of these companies have become unicorns (that is, well-known all over the world). Take, for instance, Grammarly (which is actually decacorn) and GitLab (which also jumped over its $10 billion IPO on Nasdaq). 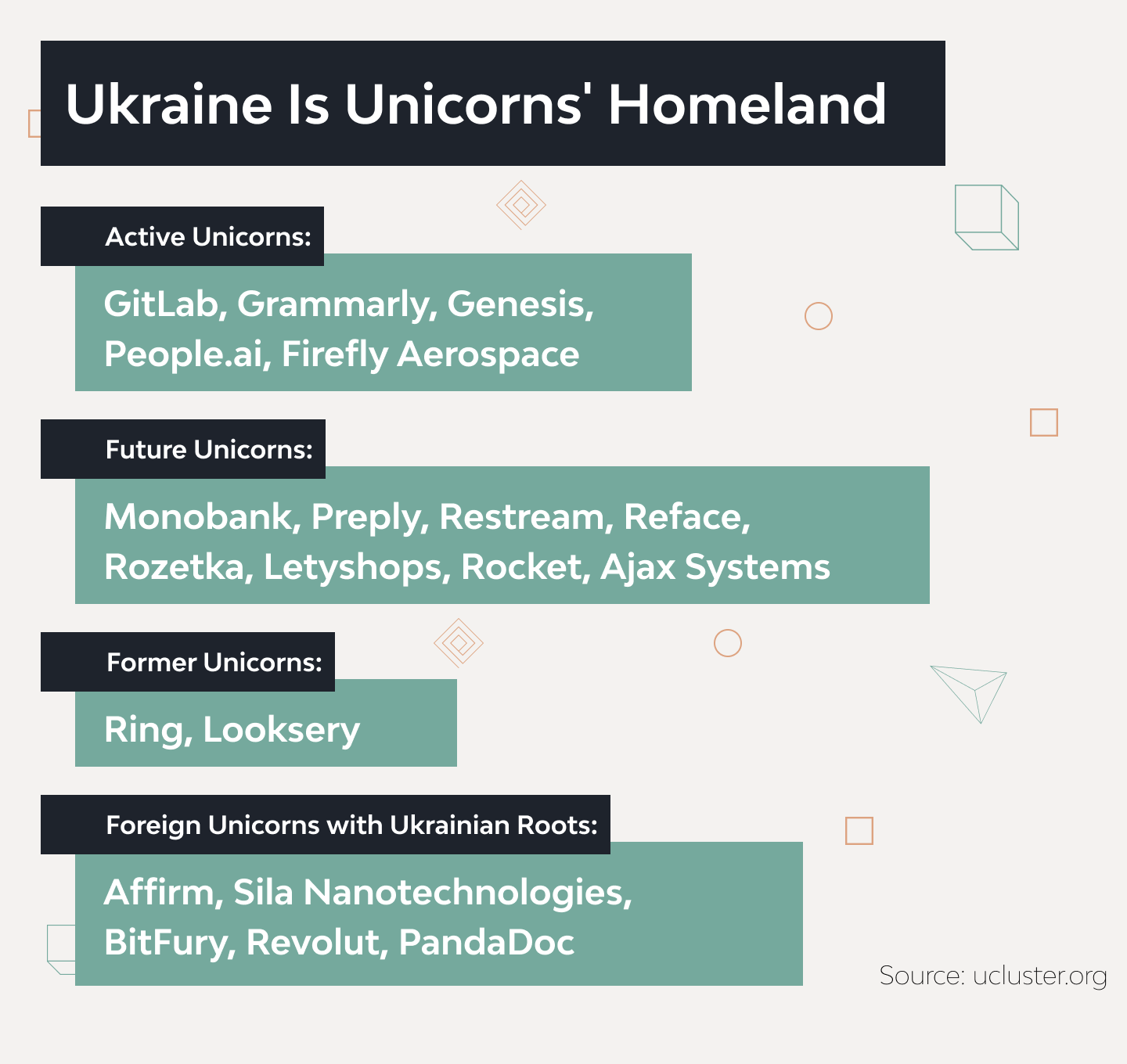 In addition, some Ukrainian startups have been bought by Google, Snapchat, BlaBlaCar, and others. (According to PitchBook, some 126 startups have raised VC funding since the beginning of last year and have a primary or secondary office in Ukraine.) Our innovation is being recognized by the global giants.

Moreover, tech leaders from all over the world have opened R&D centers here. 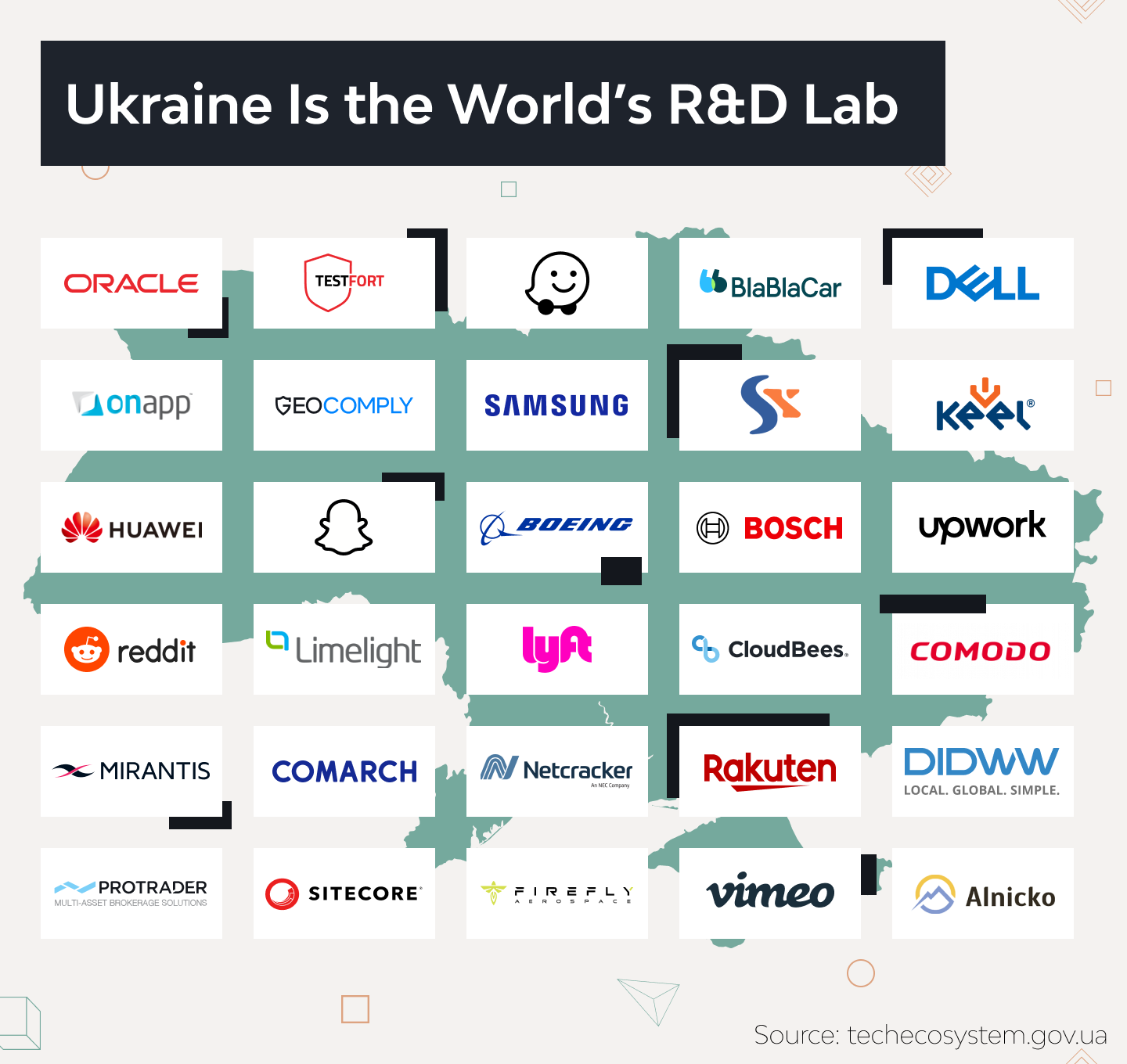 Take our company, Django Stars. It’s grown by 150% in the previous two years and now employs 100+ skilled pros. We’re involved in development projects around the world in sectors including fintech, travel, and edtech. Although the 450 mln in funding raised by our clients may not seem much on a national scale, we consider ourselves to be a part of the Ukrainian tech community. And the contribution of each participant matters.

As the above shows, Ukraine is distinguished by a large and promising IT community with strong traditions, qualified personnel, and a favorable environment for innovation. Thus, I can offer several reasons why you should stand with Ukraine in these difficult times:

How the War Has Affected the Tech Industry

Returning to the fears that clients may have because of the invasion, I’d like to highlight several points.

With respect to the reaction of Ukrainian IT to the Russian military invasion, it’s worth taking into account some preconditions:

Thus, we had the opportunity to prepare and not lose data on current projects.

In February, some companies heeded the warnings of foreign intelligence agencies and began to take their employees out of dangerous regions in advance. Other companies were forced to carry out their relocations in the first days of the invasion.

In total, about 16% of Ukrainian IT specialists went abroad after February 24, according to estimates from the IT Ukraine Association. Nearly 70% of these specialists moved to safer regions in the western part of the country. 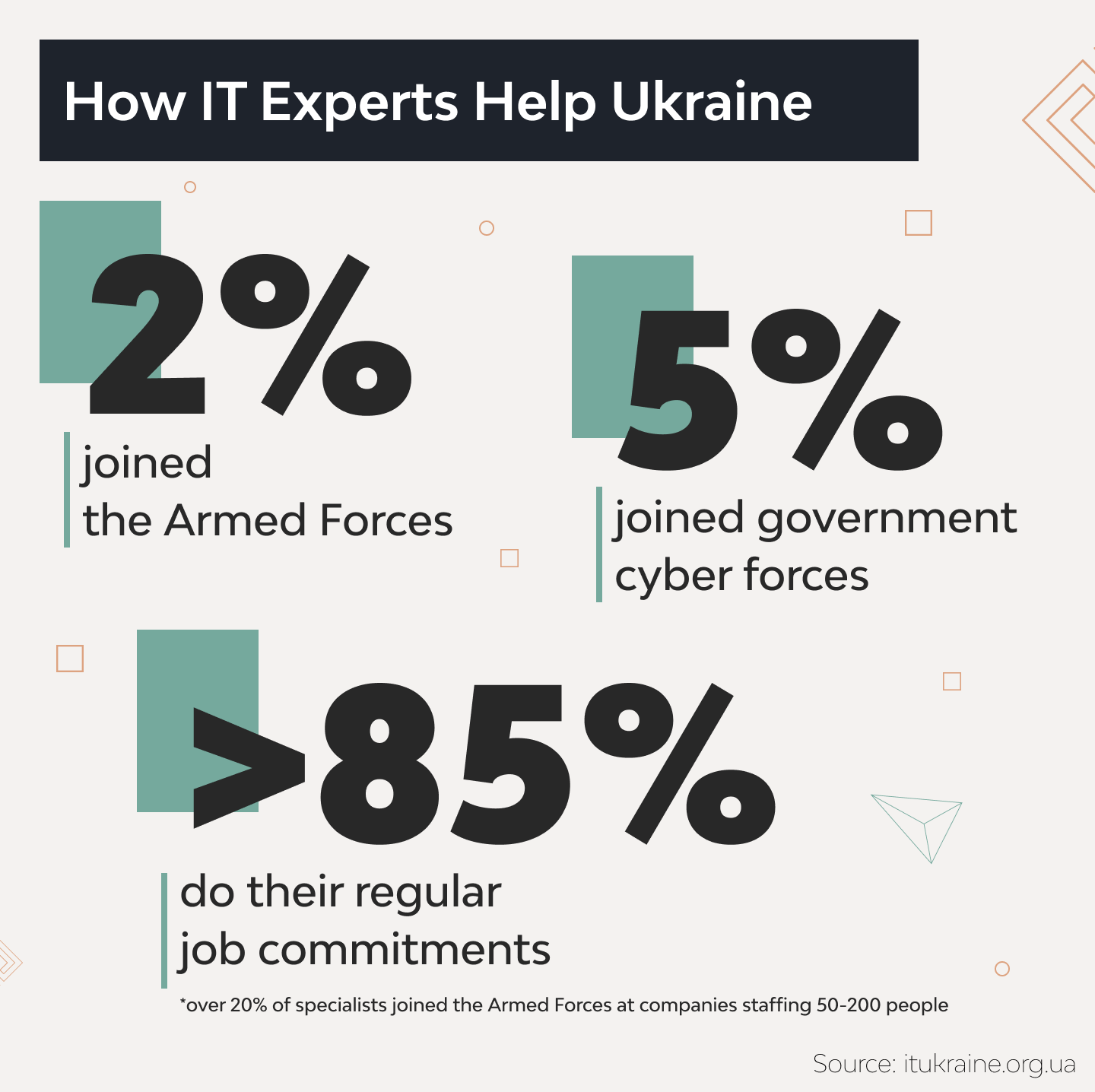 Thus, although the need to support their families and country motivates people to continue working even in bomb shelters, if necessary, development processes have long been worked out and are quite stable.

Today, most companies continue to deliver steadily and have recovered about 90% of their volume of operations. For example, Django Stars has restored 93,94% of its pre-war capacity as I write these lines. It should be also noted that the Ukrainian banking system played an important role by honorably withstanding the blow of the war.

The question of military mobilization may be a concern, especially in relation to men. But the technical community does much to maintain predictable rules of the game in this area.

The association currently is working with the Minister of Digital Transformation to make sure that the key personnel can be really booked, and we already have this legislation.

In terms of the country’s defenses, there are several front lines, including physical and economic forces. Working projects need people to ensure that they keep paying taxes to support the economy.

In addition, the Ukrainian army is dealing with a long line of volunteers who are ready to defend their country. Priority is given to those with relevant training and experience. IT professionals are not the first ones to be mobilized. Besides, they can be more effective by doing what they’re good at. For example, there’s also an information front involving so-called cyber forces. This is an initiative of the people, many of them volunteers, who are actively fighting against the spread of Russian propaganda.

Because clients aren’t dealing with individuals but with tight-knit teams, it’s possible to use task prioritization and teammates’ help. I won’t speak for other companies, but at Django Stars we never stopped hiring — among other things,  to watch the backs of our mobilized employees.

Join Forces To Weather the Storm

The Ukrainian companies respect their commitments and are doing everything possible to protect their clients’ interests in these unprecedented circumstances. However, this doesn’t mean there are no difficulties. Today, any help from abroad is highly welcome. What can such help consist of?

The wartime risks of working with Ukraine are offset by the country’s strong and developed tech sector, pre-established processes (including online collaboration tools and contingency plans), and effective team support (including moving people to safer regions and additional hiring).

If you support Ukraine, your business can benefit from keeping our country’s tech sector afloat. To do it, consider signing contracts with UA, purchasing Ukrainian licenses, sharing recommendations, stopping propaganda, and cutting off financing to the aggressor.

These measures are what Ukraine needs. Weapons are needed as well, but that’s clearly beyond the scope of an IT article. However, if you want to donate to our army and volunteer organizations, please follow this link for guidance and payment details.

Why You Should Keep Working with Ukrainian IT Companies 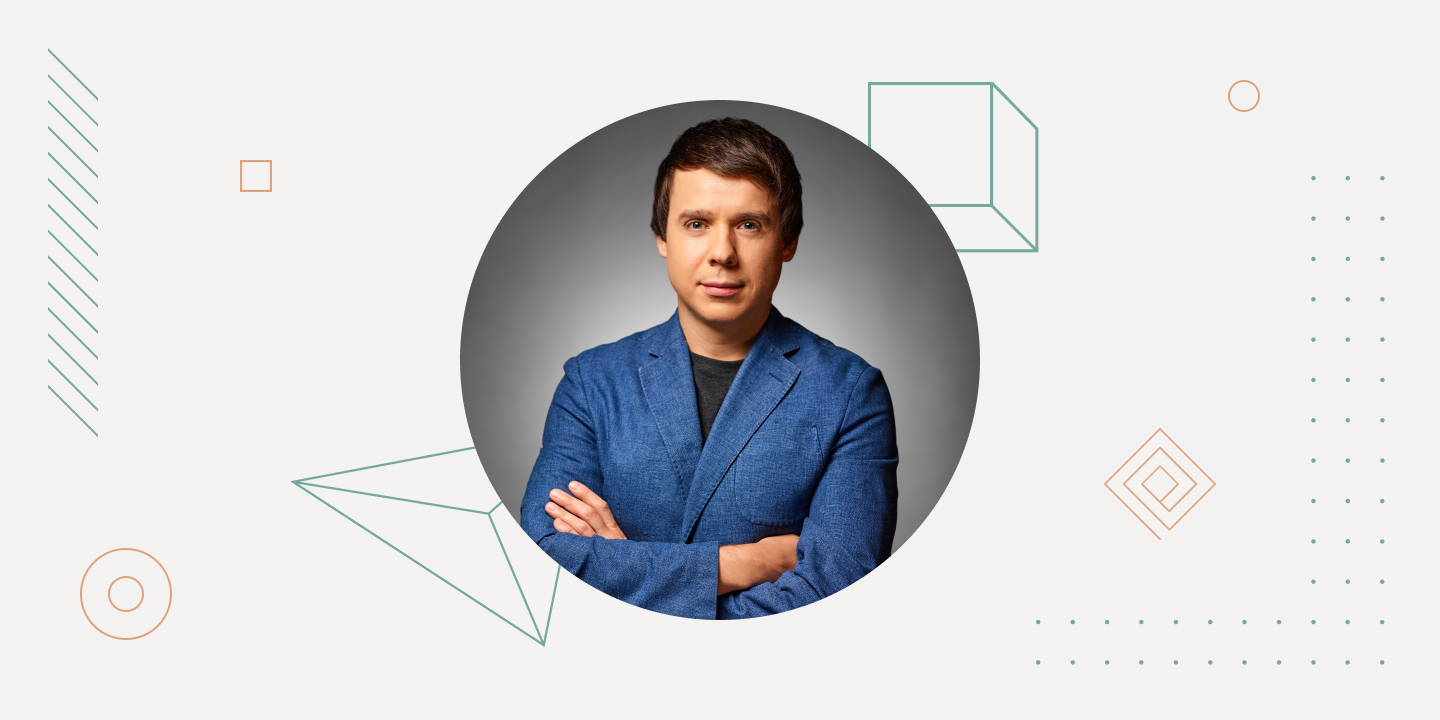 10 Lessons after 13 Years of Being CEO

Roles and Responsibilities in the Software Development Life Cycle (SDLC)

Why Does Your Project Need a Business Analyst?

How to Update Your Product’s Design to Meet Users’ Expectations

The Pre-Development Phase: How to Avoid Mistakes that May Cost You a Fortune

Software Development Process from the Inside: Everything You Need to Know

Vue.Js for Fintech: What Will Your App’s Users Thank You For?

Gathering Project Requirements: The Foundation for a Smooth Start to Software Development

Human-Centered Design: Why Does It Matter?

Turning Complex Into Simple. 6 UI/UX Cases from a LegalTech Project

How to Create a Product That Investors Will Commit To

ISO: meaning and why does it matter?

Travel as a Service: How to Develop a Travel Platform

Digital Transformation in Banking and Finance: The How and Why 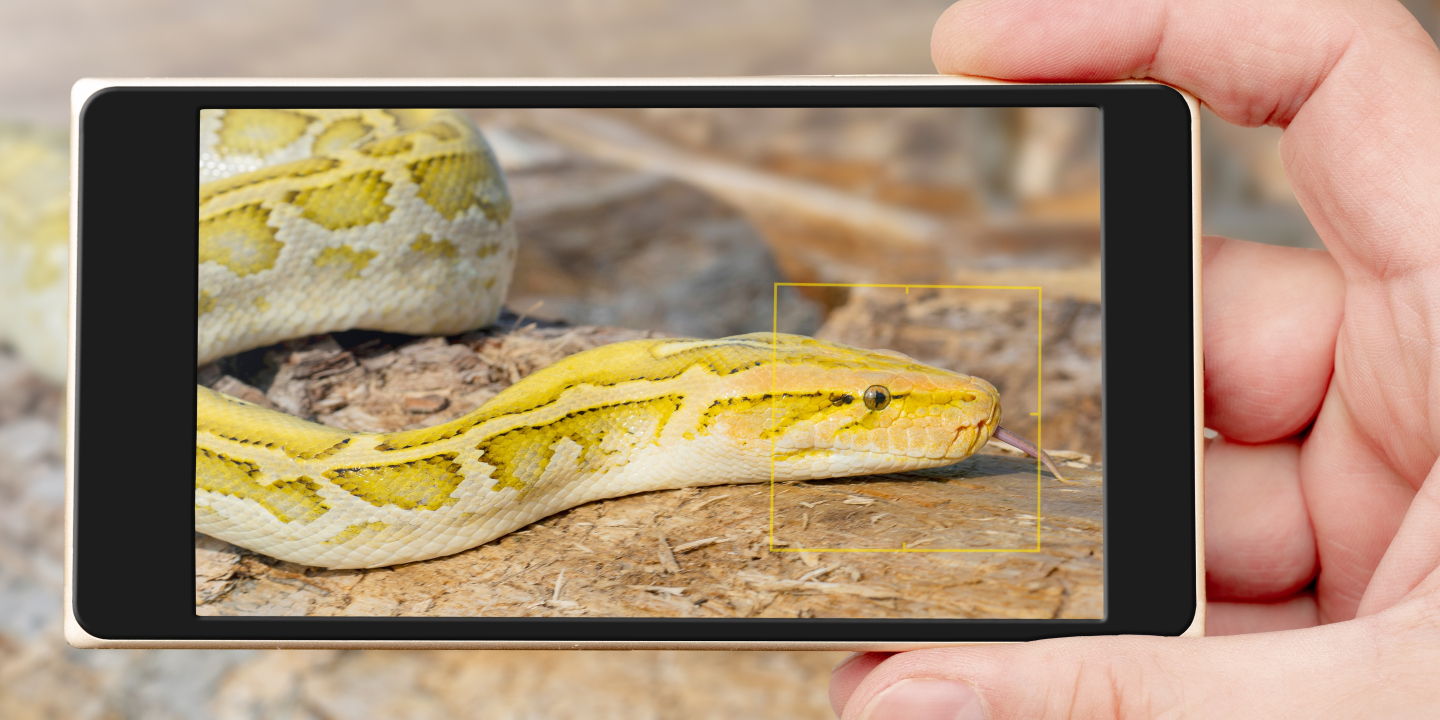 How Python Can Help You Kickstart and Scale Your Startup

How to Launch a Digital Product and Win in a Crisis

How to Survive In Crisis, Or Why You Need Business Automation

How to Write an Investment Proposal: Step-by-Step Guide with Templates and Examples

How to Develop a Real Estate App That Stands Out

How to Create a Project Management Communication Plan

Top 4 Tips on How to Build an Effective Design System

5 Trends that Will Disrupt the Fintech Market in 2020

The Discovery Phase: What It Is, Why It Matters, and Its Key Deliverables

How to Hire Experienced Python Developers

The UK’s Housing Market Will Never Be the Same: Reasons and Possibilities

Testing Your Django App With Pytest

How to Successfully Update Legacy Code

How to Develop APIs with Django REST Framework

Testing Requirements: How to Get Good Ones and How to Deal With Bad Ones

What to Consider When Building an Insurtech Product

11 Startups That Are Transforming the EU Mortgage Industry

Building Your Next Mobile App with React Native: 4 Essential Benefits

Getting Started with Mobile Geolocation Testing

How to Ace Project Planning with Specification by Example Approach

How we Combined Deadline-Driven Development with Agile — and Delivered

5 Innovations in Banking Application Development: From Challenges to Opportunities

How to Build a Travel Service Customers Will Love 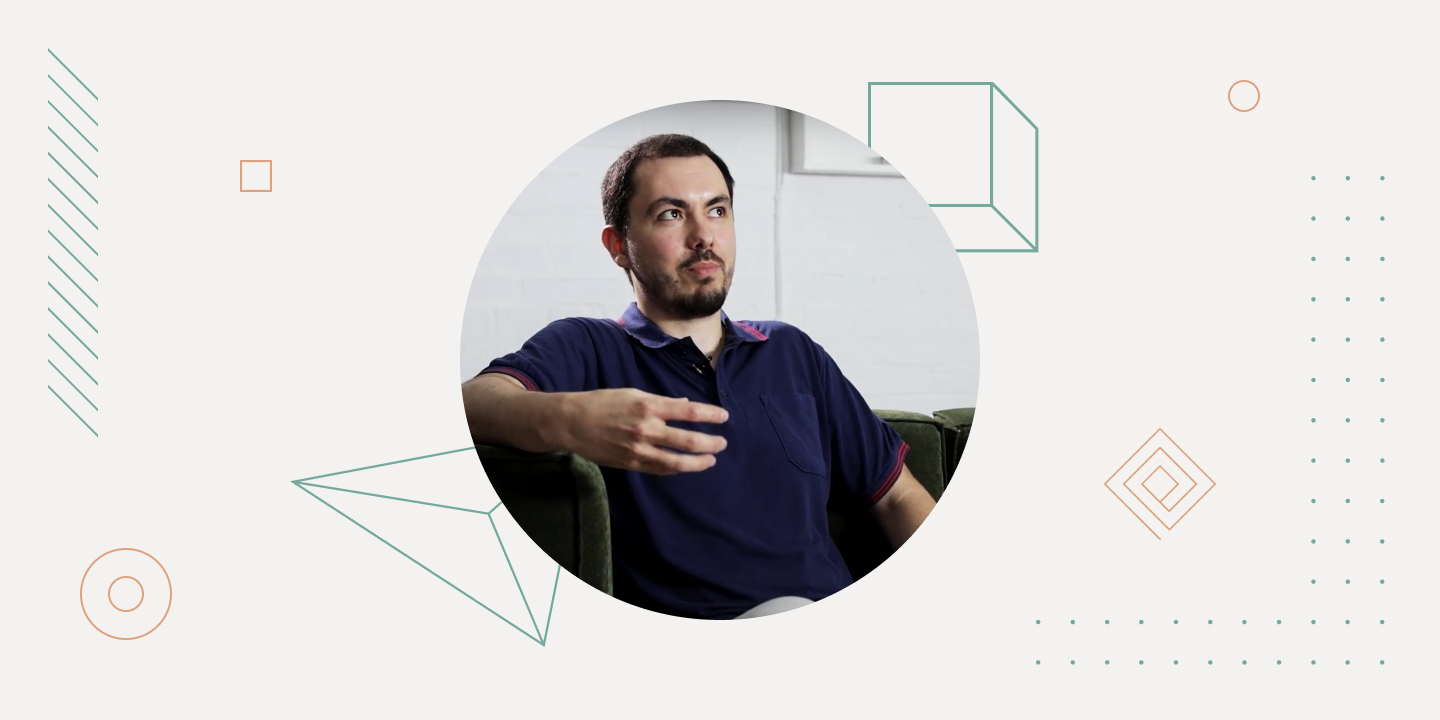 How to Manage a Software Development Team Across Time Zones

Meeting Customer Needs: How to Choose a Payment Gateway for Your Startup 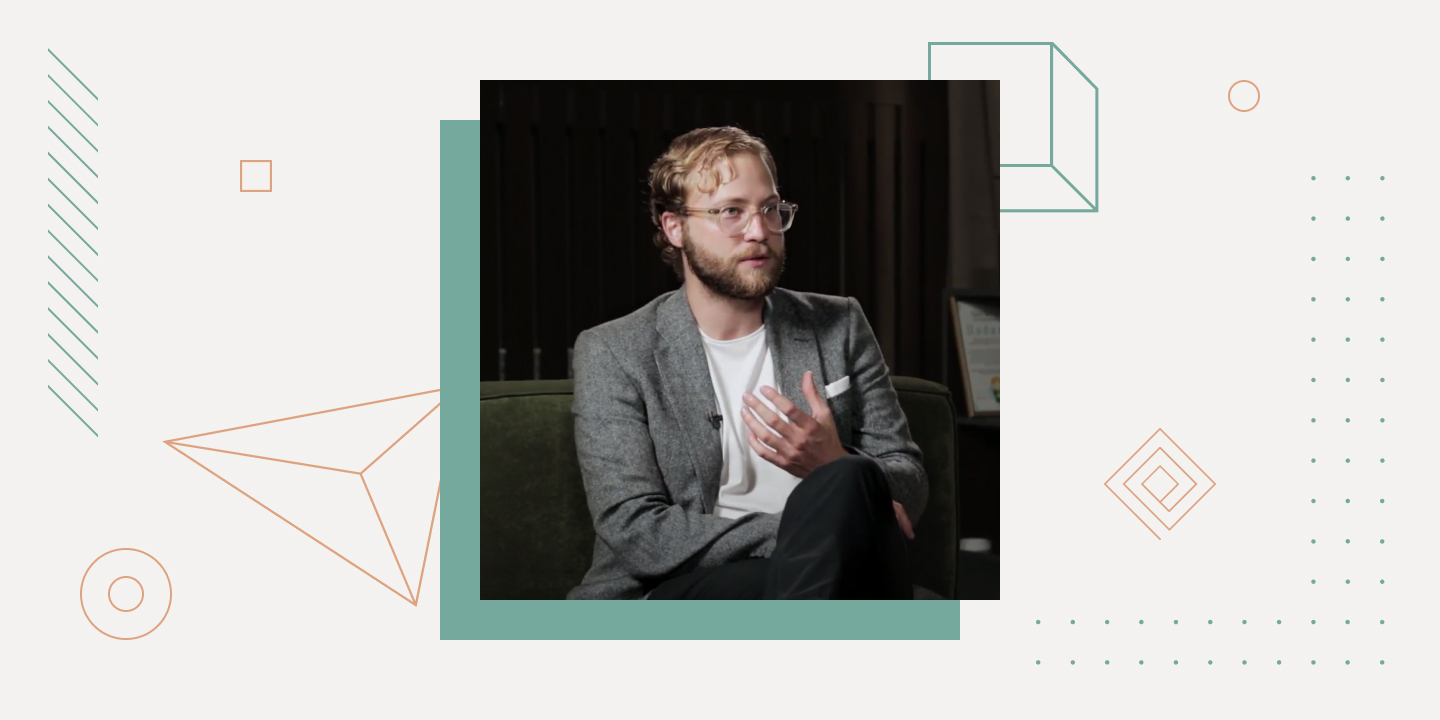 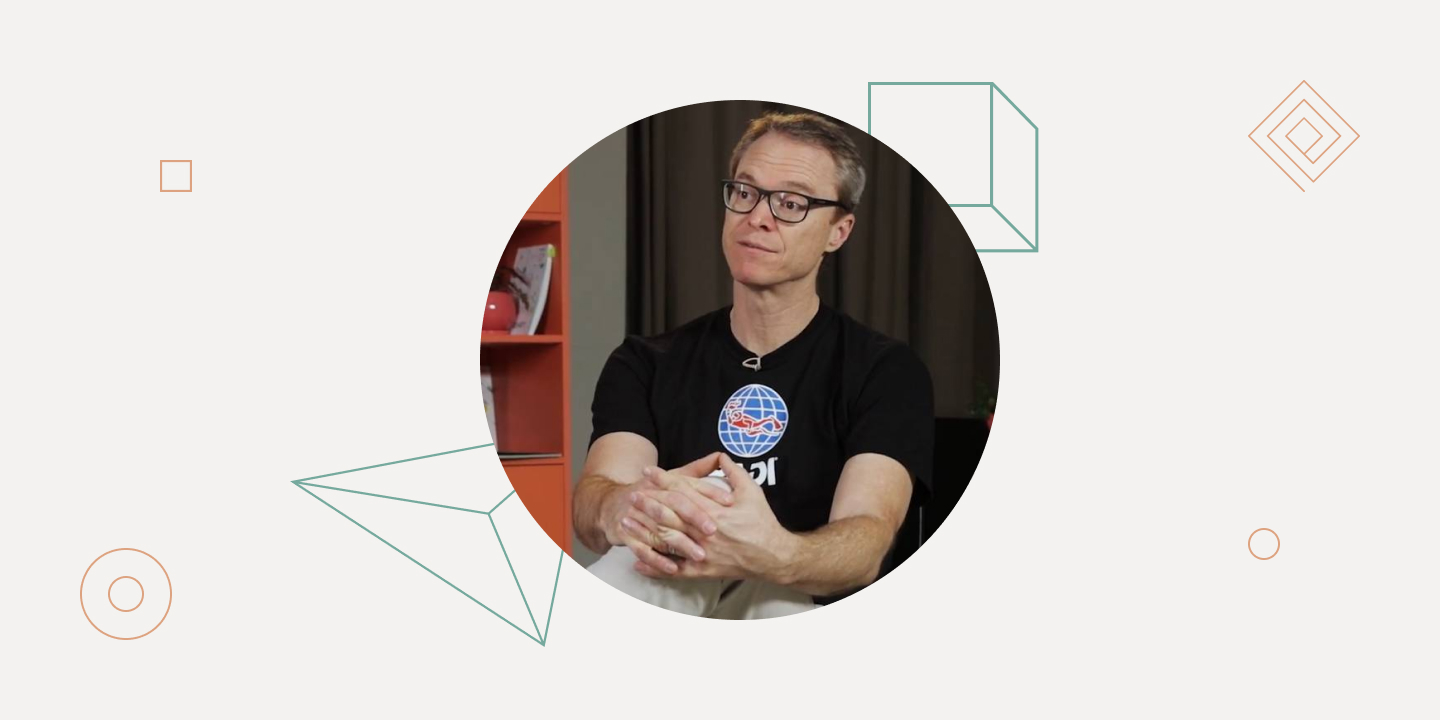 Why Project Communication Is Important and Worth Your Money

How to Successfully Set Tasks For a Development Team

When It’s All Fun and Games: Gamification Ideas for Banking Services to Engage Customers

Comparing Python and Node.Js: Which Is Best for Your Project?

6 Examples of AI in Financial Services

7 Top Apps Made With Python

A Guide to Lottie Framework: 5 Steps to Create an Animation

What is RegTech? A guide to the latest trend in the fintech area 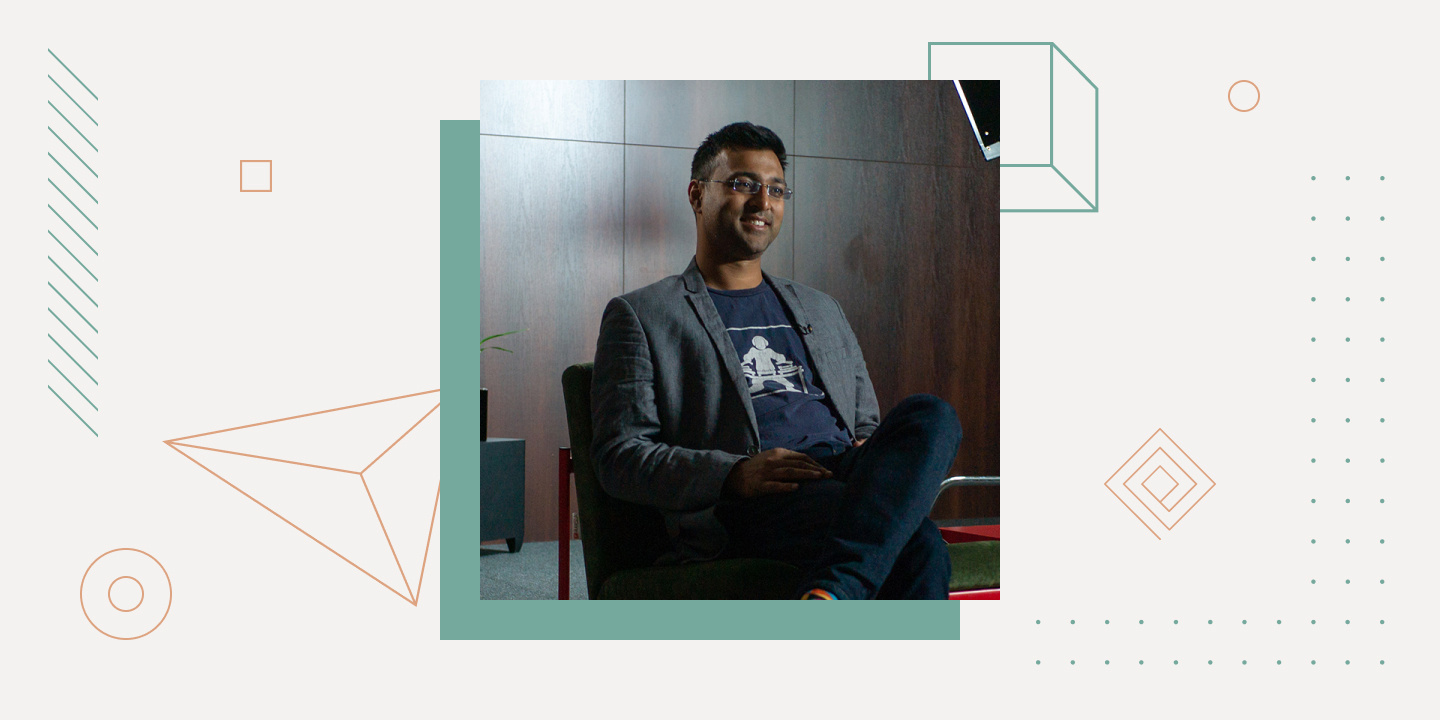 Innovating the Mortgage Industry: The Why and the How

A Decade of Django Stars

How to Build a Successful Online Mortgage Service: Tips and Insights

How to Develop a Location-based Application Using React Native

How To Speak The Same Language As Designers

Why You Need QA and How It Can Save Your Money

How to build your own blockchain for a financial product

How to develop a travel booking service: 5 lessons from the PADI development team

Docker Tutorial: What is Docker and How to Use it With Python

What is DevOps and Why You Should Have It

Web Frameworks: How To Get Started

How Much Does It Cost to Build a Messaging App

How Much Does it Cost to Build an Uber-like Taxi App in 2020?

Django vs Ruby on Rails Comparison. Which Framework is Better?

10 Things to Remember When Designing your App’s UX

Continuous Integration: CircleCI vs Travis CI vs Jenkins vs Alternatives

UI/UX Terminology: What Every Designer Should Know

Django-Classifier or What Have I Done?

How to Gamify a Mobile App: Tips and Examples

How Much Does It Cost To Build a Web App?

What Clutch.co Is, And Why You Need It

How Much Does It Cost To Develop A Mobile App?

Thanks for
joining us! 💚

We’ll let you know, when we got something for you. 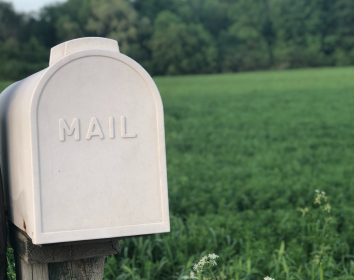 Latest articles right in
your inbox

Thanks for
subscribing.
We've sent a confirmation email to your inbox.

We store cookies on your computer. We use these cookies to collect information about how you interact with our website and remember you. We use this information to improve and customize your browsing experience and for analytics and metrics about our visitors both on this website and other media. To find out more about the cookies we use, check our Privacy Policy.