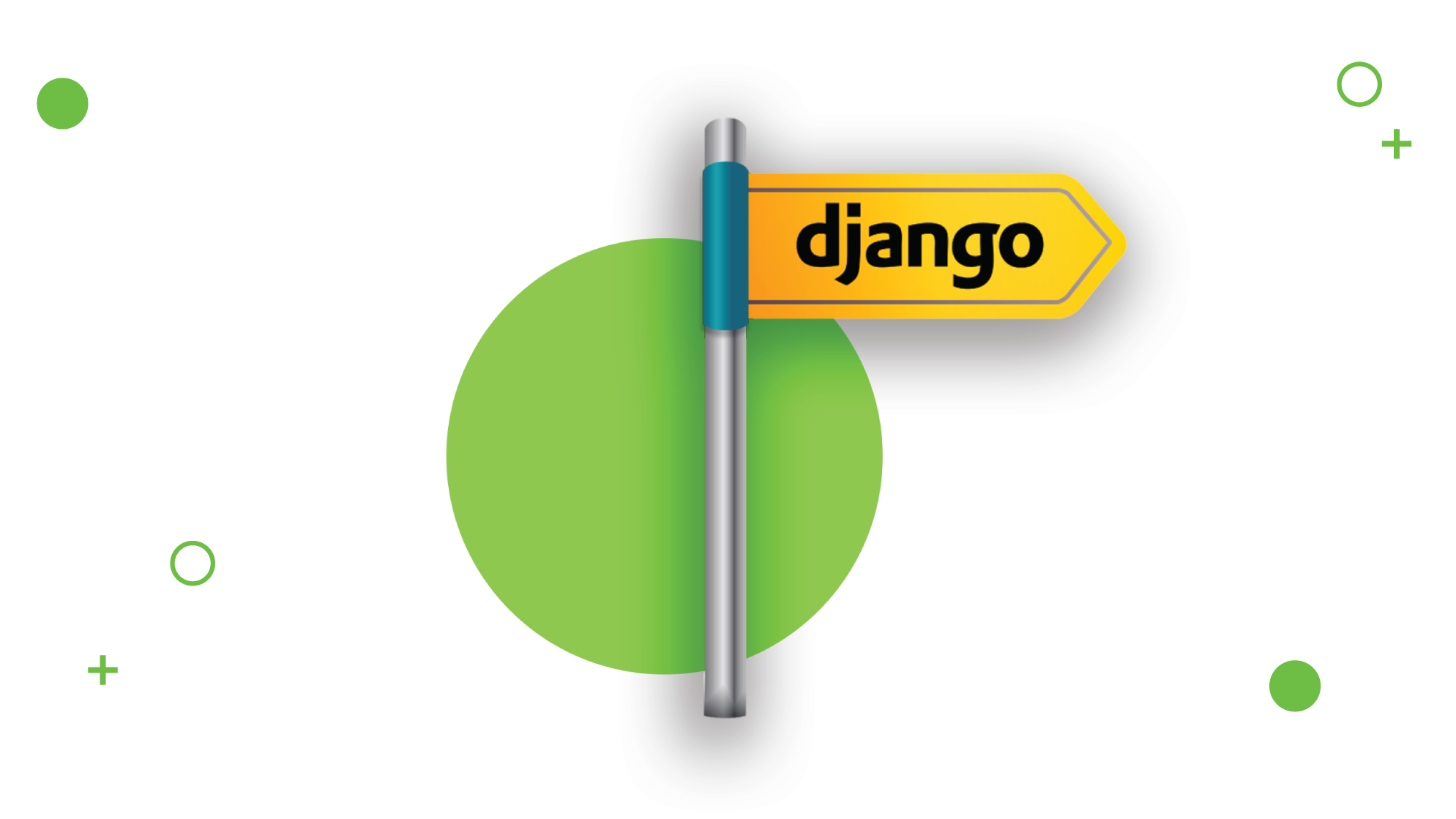 Django is one of the top frameworks for web development, but why is it so popular among developers and business owners? Let’s review the reasons why so many applications and features are being developed with Django.

Django’s documentation is exemplary. It was initially launched with high-quality docs, and they are still maintained at the same level, which makes it easy to use.

More than that, one of Django’s main purposes is to simplify the development process: it covers the basics, so you can focus on the more unique and/or complex features of your project.

The framework is based on Python — a high-level, dynamic, and interpreted programming language, well-loved by developers.

Although it’s hard to find a language that can cover most programming tasks and problems, Python is a great choice for many of them. It’s one of the most popular languages of 2018, competing with C/++ and Java. 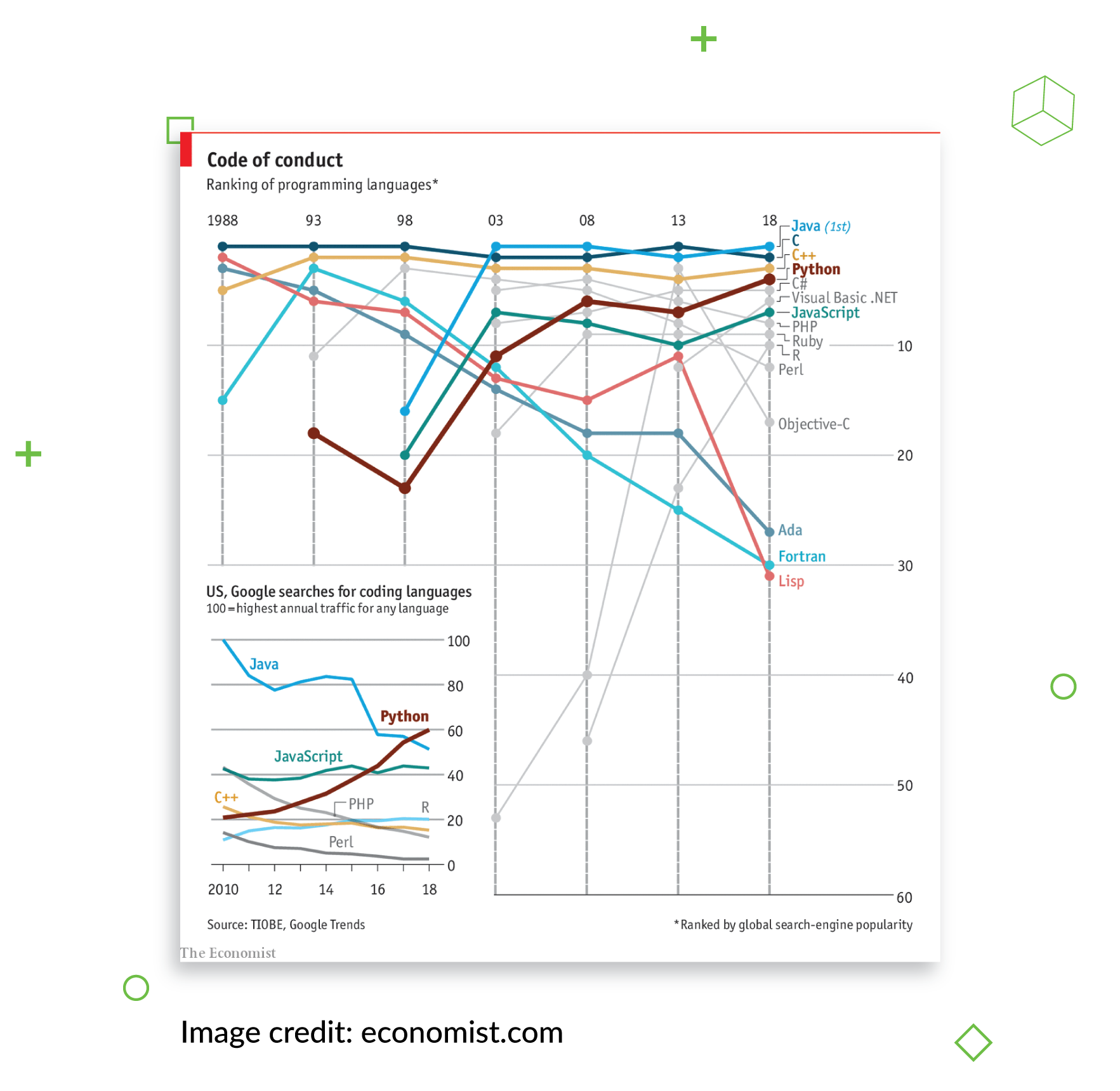 Python web application development with Django requires less code and less effort. Also, Python has extensive libraries, which make it easy to learn or switch to this language from another one. Customers like Python since it usually takes less time to write the code and, thus, less money to complete the technical part of a project.

3. Django has many useful features and extras to simplify development

Django has adopted Python’s “batteries included” approach — the framework has everything necessary to develop a fully fledged application out of the box. 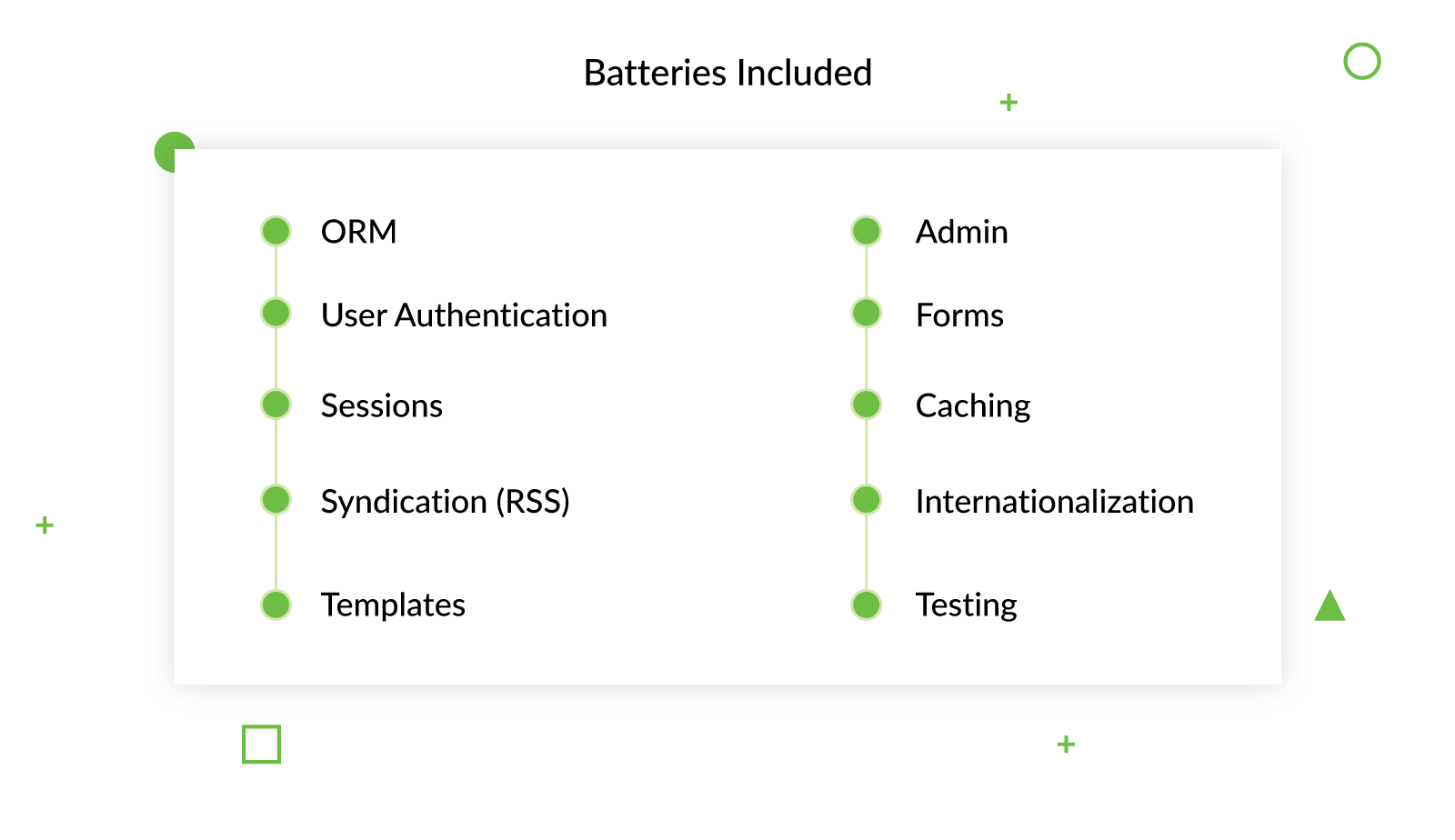 You don’t need to spend hours customizing it to build a simple application or a prototype since all of the essentials are already available. But if you need additional features for a more complex app, there are well over 4,000 packages for Django to cover profiling, testing, and debugging.

The framework also has tool packages for working with cutting-edge technology such as data analysis, AI, and machine learning. They are easy to set up and use in your project. Plus, they’re great if you’re using Django for FinTech or other math-heavy industries.

Is Django development good for  MVPs and prototypes? Yes, thanks to multiple features that make it time- and cost-effective.

Let’s sum them up:

5. Django suits any kind of project

Django is not an enterprise solution like C# or Java, yet it suits most types of projects, no matter their size. For example, if you’re building a social media type web application, Django can handle the growth at any scale and capacity, be it heavy traffic or volumes of information. But if you want to make something simple, using Django for web development of a blog or a book database, for instance, is an excellent choice as well since it has everything you need to quickly assemble a working application.

In addition to that, Django is: 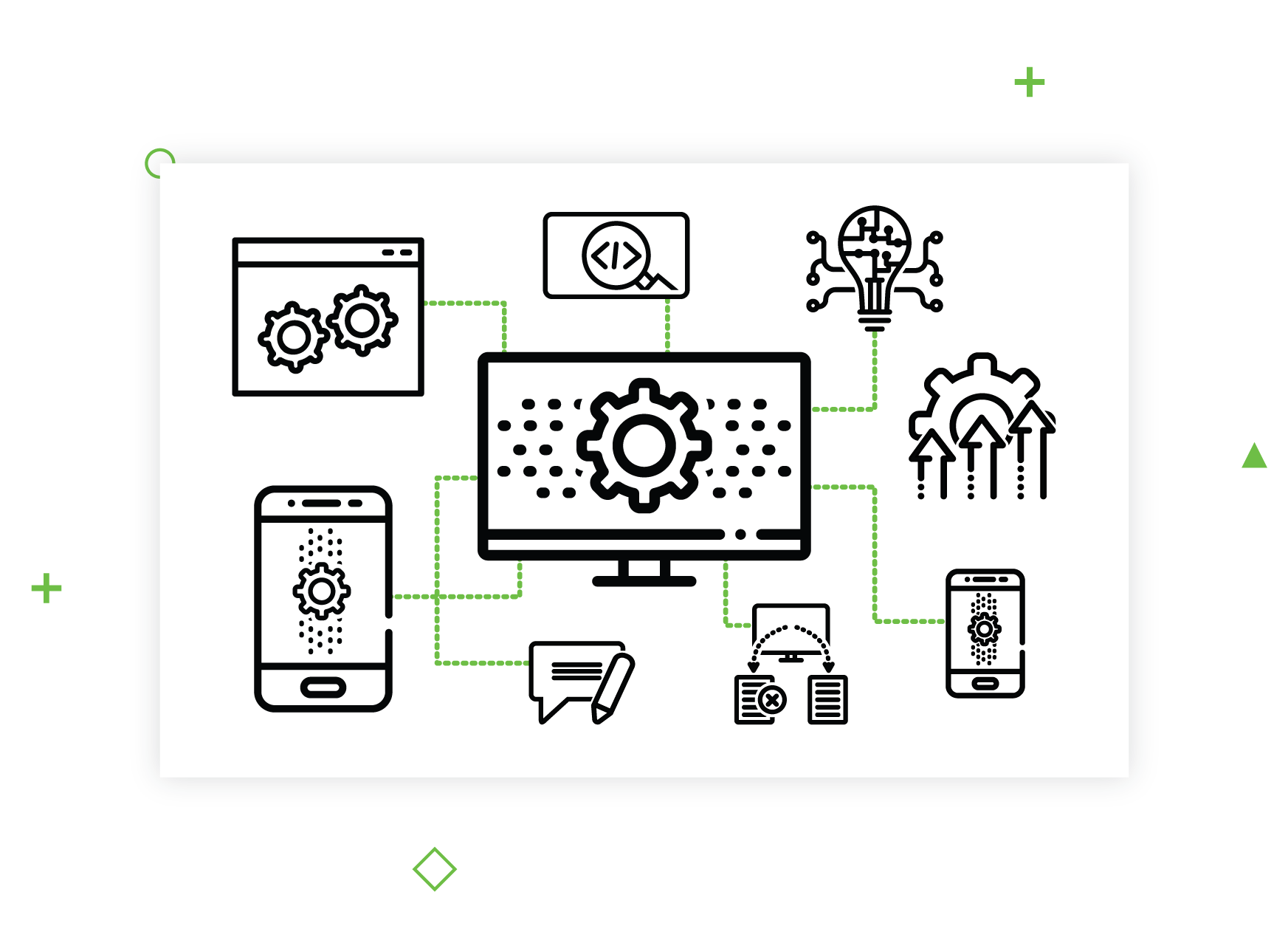 6. Django is DRY and KISS compliant

Django follows the DRY (Don’t Repeat Yourself) principle, which means you can replace frequently repeated software patterns with abstractions, or use data normalization. This way, you avoid redundancy and bugs. Plus, reusing the code simplifies development so you can focus on coding unique features.

KISS means “Keep It Short and Simple”, among its many variations. In Django, it means simple, easy to read, and understandable code. For example, methods shouldn’t be longer than 40-50 lines.

7. Django is secure and up-to-date

Django is always kept up to a high standard, following the latest trends in website security and development. That definitely answers the question “Is Django good for web development?” — as security is a priority in any project. Django is updated regularly with security patches, and even if you’re using an older version of the framework, its security is still maintained with new patches. It’s no wonder since Django has an LTS (Long-term Support) version.

You can use the interface of Django’s older versions, and most of its features and formats. In addition, it has an understandable roadmap and descriptions — the release notes contain all the information you need to know about changes and, more importantly, when new changes become incompatible with previous releases.

9. Django is compatible with DevOps

You can also enhance your project using the DevOps methodology, which aims to shorten lifecycles while maintaining business objectives. It’s especially good if you’re using Django for banking web applications since they are quite complex.

It’s great because you can:

Read More: What is DevOps and Why You Should Have It 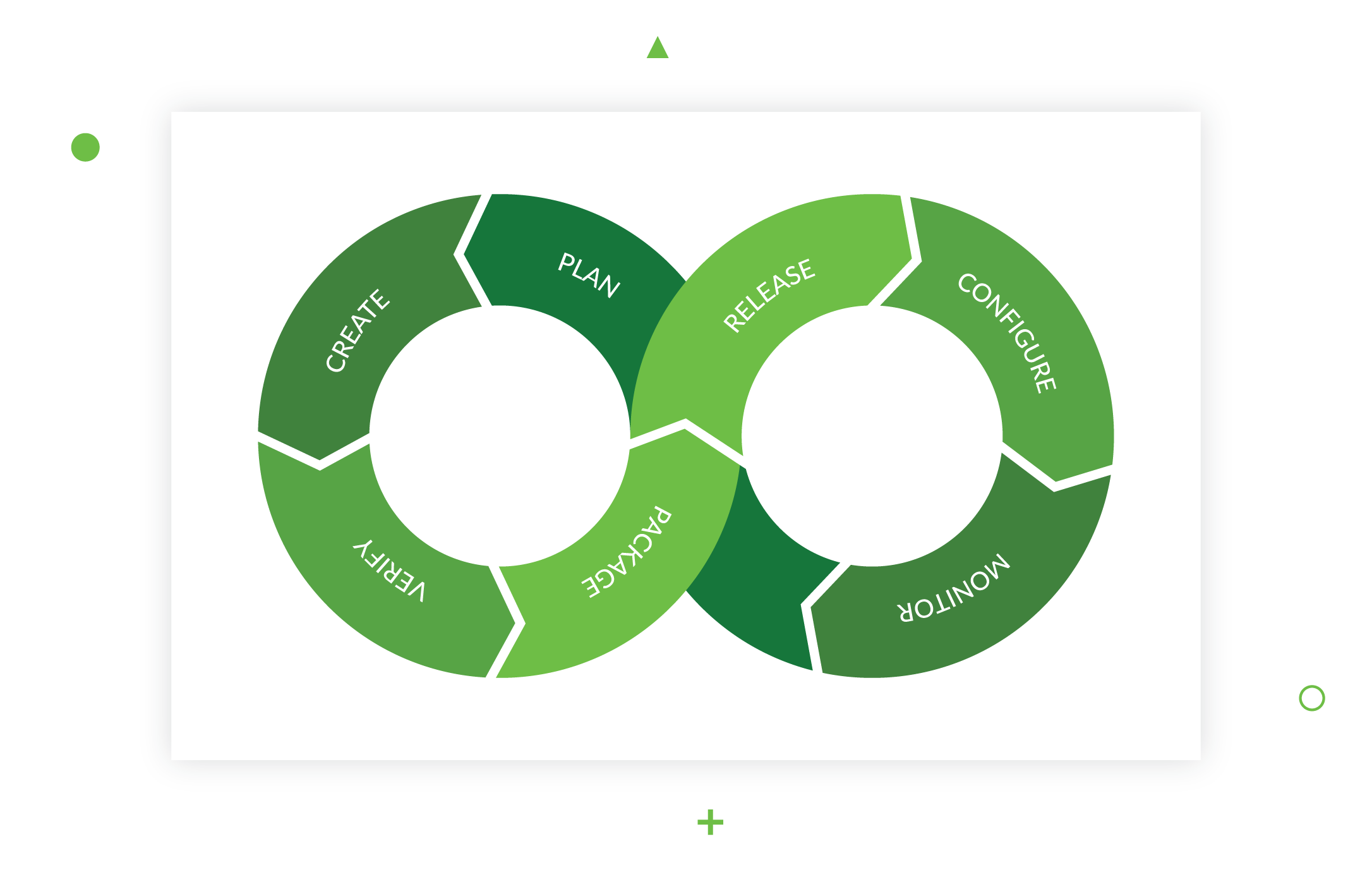 10. Django has its own infrastructure

Django doesn’t depend on any outside solutions. It has pretty much everything, from a web server and a templating engine to an Object Relational Mapper (ORM), which allows the framework to use different databases and switch between them within one project.

Plus, Django has libraries and tools for building forms to receive input from users. That’s important for any website that’s supposed to do more than just publish content.

11. Django has a REST framework for building APIs

The benefits of using Django for web development also include its Representational State Transfer (REST) framework — a popular toolkit for building web APIs. Django’s REST is powerful enough to build a ready-to-use API in just three lines of code.

One of its key advantages is that it’s extremely flexible: data is not tied to any methods or resources, so REST can return different data formats and handle multiple types of calls. As a result, it can meet the requirements of different customers. 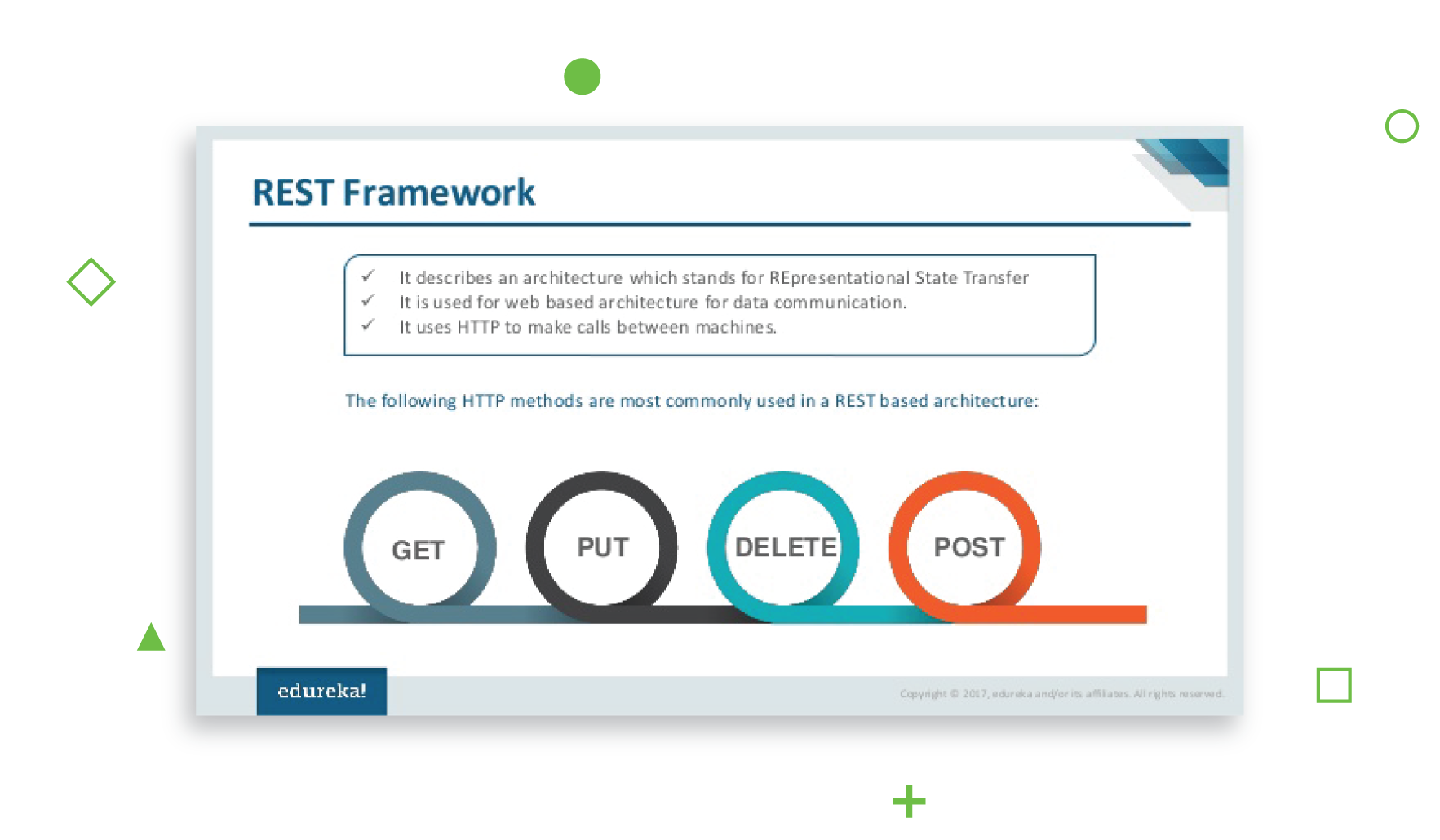 The Django framework has been around for more than a decade, and during that time, it has become the choice of many companies for creating their web applications.

A few of the famous examples are:

What is the framework Regardless of the sphere you work in, one of your most important tasks is to create a fast, good-looking website. Today, almost every business needs a website, which acts as a sort of business card for a company or online service. It helps you engage with customers, promote your business, increase sales and so on. In every case, the website should be fast, scalable and dynamic....

13. Django has a big, supportive, and professional community

Advantages of Django also include its big, professional community. It’s quite easy to find good developers who know Django inside out and have experience coding with it.

That’s a good testament to the framework’s popularity – but it also means that:

A huge advantage of the large Django community is that it’s easy to find good developers for your team. Moreover, you can extend an existing team, since all Django developers use the same documentation, code pretty much the same way, and can easily read each other’s code.

You can use Django to start a small, simple project, and continue using it when the project grows, ensuring its high quality, functionality, and security. You can also use it to test an idea and save a lot of money if you find the project won’t be worth investing in.

On the other hand, Django as a one of the top frameworks for web development allows you to build a complex web application that can handle heavy traffic and huge volumes of information. It also has numerous packages with additional tools to power cutting-edge technology such as data analysis and machine learning.

Django could be the best fit for your next business idea regardless of what type of software project it is.

18169
How to build your own blockchain for a financial product
Technologies are changing fast; people are not. – Jakob Nielsen Blockchain is a relatively new technology that many deem is used only for buying Bitcoins. They try to implement it in whatever sphere comes to mind, whether it is fashion, education or healthcare. I would say it is okay — too little time has passed to determine which area of human activity can benefit the most from applying this technology....

189193
10 Popular Websites Built With Django
What is the framework Regardless of the sphere you work in, one of your most important tasks is to create a fast, good-looking website. Today, almost every business needs a website, which acts as a sort of business card for a company or online service. It helps you engage with customers, promote your business, increase sales and so on. In every case, the website should be fast, scalable and dynamic....

12880
How to Build a Unique Technology for Your Fintech Product with Python
Fintech is a maze. It’s a thrilling and extremely complex industry for software development. There are state level regulations, integrations with different services and institutions, bank API connections, etc. to deal with. Another challenge is the high level of trust from the end users required to run finance, mortgages, investments and such. These, in turn, require the highest level of security, functionality, and correspondence with requirements. What I’m trying to...
Thank you for subscribing to our newsletter!